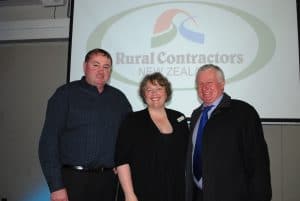 At its annual conference in Masterton 26-28 June, the RCNZ board elected Southland contractor David Kean to be its new president and Waikato contractor Helen Slattery to be its new vice presiden.

David has been on the RCNZ board since 2009 and served as vice president for the past five years.

Helen has been on the board for six years and serves on a number of the RCNZ’s subcommittees including health & safety, training, and biosecurity. She is also on the Waikato Regional Council committee that is developing a long-term management plan to deal with velvet-leaf and other intrusive weeds, pests and viruses.

Both are second generation contractors. In 2003, David took over the sheep dipping and weed spraying business that his father Leo started in 1966. In 2016 his two sons, Jarrod and Nicol, joined him in the business.

Helen and her husband Roger Slattery now run the Matamata contracting business that Roger’s father and uncle started in the mid-1950s. Along with their contracting business Roger and Helen also operate a collection service and compacting unit for Plasback, which recycles waste silage film throughout New Zealand.

“I first attended an RCNZ conference in 2000,” David says. “It was a fantastic opportunity to talk with like-minded contractors and benchmark my business against theirs. I decided it was good for my business and I have been to every annual conference since then.

“The conference is a great place to learn about the latest technology and get updates on changes to employment and tax law, health & safety, and other regulations.

“The Rothbury Insurance scheme that we can get access to through RCNZ and discount fuel scheme from Allied Petroleum are other benefits that RCNZ provides its members.”

David and Helen say that finding good employees is a priority for New Zealand’s rural contractors.

They applaud the Immigration NZ’s recent decision to renew the RCNZ’s Agreement in Principle (AIP), which makes it much easier for qualified contractors who belong to the RCNZ to bring in skilled drivers from overseas.

“There is a labour shortage throughout New Zealand. We try to hire New Zealanders first, but it is not always possible,” David says. “Under our AIP, RCNZ members are allowed to bring in a total of just 300 overseas agricultural machinery operators.

“Often the young guys we bring in are more familiar than we are with the latest technology because it arrives in Europe before here, so they serve a training role for us as well as driving.”

Training is a particular interest of Helen’s. She is an assessor with Connexis, the industry training organisation that serves rural contractors and she has helped write some of its qualification standards.

She also a facilitator with Good Yarn, which educates rural people how to look out for the signs of stress, depression and other mental health problems.

“Connexis provides RCNZ an accreditation programme for contractors,” Helen says. “With growing concerns about M. bovis and other biosecurity threats, it has never been more important for farmers to hire contractors who hold registered or qualified contractor status.”