Rural contractors really need to know the numbers that drive their business and share them with their farmer clients. That was the advice from NZX Head of Insights, Julia Jones, to the first of three Rural Contractors NZ roadshows, held in Palmerston North, Whangarei and Hamilton this week. 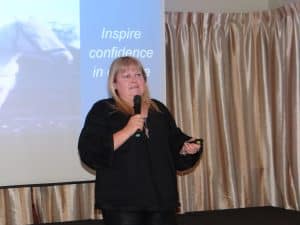 The Palmerston North event also saw a delighted North Island Trainee Contractor of the Year, Mat Peart from Sims Contracting in Otaki, presented with his award.

NZX is being contracted to deliver a cost reference point to RCNZ and Federated Farmers.

“It will be available to RCNZ members via the organisation’s website allowing them to track two of their biggest costs – fuel and fertiliser – and help them with their planning. Other cost reference points may be added in time if we can get meaningful independent data,” said RCNZ CEO Andrew Olsen.

Julia Jones told the 150 contractors who attended the North Island meetings they needed to know the margin they were making. “What revenue do you get from a job? No one wins if you are not making money.’’

Waikato Federated Farmers vice-chair Keith Holmes, who was part of initial meetings earlier this year on cost issues, told the Hamilton meeting he fully endorsed the accord being developed. “Farmers and rural contractors need each other,” he said.

As a lifestyle block owner in the Waikato, Julia Jones said she is herself a user of the services provided by the $2b rural contracting industry. “I tell my rural contractor to charge me more,” she said, impressed by the machinery used and the speed at which jobs like baling sileage could completed.

A show of hands at the Palmerston North meeting indicated few contractors had increased their prices by 20% or more in the last four years when the cost of two of their biggest inputs – diesel and urea fertiliser – had doubled. That wasn’t the case when other areas were provided with a show of hands.

“I expect we’ll see contractors having these conversations with farmers and growers more consistently – they need to,” said Andrew Olsen.

Julia Jones said rural contractors needed to develop an ethos about charging appropriately. “You don’t have to do business with everyone.” World food prices were going through the roof and no matter how global tensions played out, people would always need to eat. Rural contractors were key to that happening. “Your role isn’t going to go away but you do need to evolve and stay relevant.” She said rural contractors were an essential, if largely unrecognised, contributor to New Zealand’s role as a food producer and exporters. The first priority for a rural contractor was to look after their wellbeing and then to be on top of their costs.

The North Island roadshows will be followed by meetings in Gore and Christchurch before the end of the month. They also include presentations from the Ministry for Primary Industries (MPI) and Growsafe’s Dean Bowden who provided a welcome update to spraying contractors on the requirements of new standards for the storage, transport and use of agrichemicals.

“Chemical storage and labelling is a key area for our members,” said Andrew Olsen. “It’s in transition and there are some hard-stop deadlines in 2025 which we and Growsafe will continue to emphasise.” He also acknowledged the partnership with MPI which has included help with rolling out the HanzonJobs app now being used by rural contractors and their trainees.

“Without that support we would be struggling to activate the training side of the sector and the need to access overseas labour would have been more pressing. We’ll build on this solid partnership and with MPI’s support, keep growing the contractors’ contribution to training.”

A draft contract was currently with Federated Farmers for use by rural contractors and farmers.